Explore your way around the vast countryside of the Peak District, led by your guide who will navigate the way and show you the most spectacular sights and hidden wonders the Peak has to offer. Popular routes or design hikes to your personal needs and desires.

Our guided walks are year round activities but can be weather dependent. 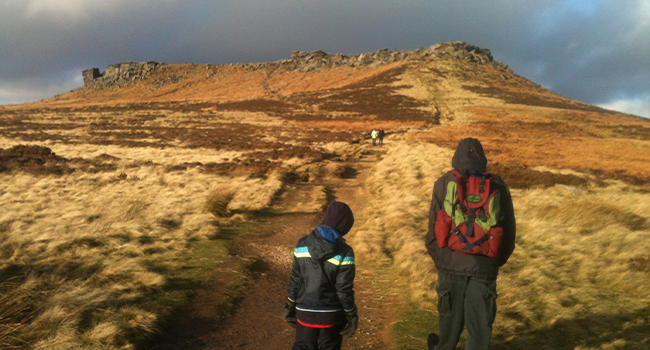 Snacks, drinks or a pack lunch are welcome for this activity and a rucksack would be recommended to carry your items.

All instructors have up to date First Aid training. Policies and Procedures including Risk Assessments are in place.

Parkhouse and Chrome Hills are the limestone remains of reef knolls from when a tropical sea covered the Peak District. Parkhouse Hill is the more distinctive of the two at over 1000ft with a fair bit of exposure on the ridge path to the summit. Chrome Hill is the higher of the two hills of 1394ft, though is less steep.

The walk starts from the village of Longnor, before finding a footpath that leads down the hillside. Follow a footpath across pasture to a wooden footbridge over the Dove. Cross the Dove and follow the path to a road beneath Parkhouse Hill.

You will then begin to contour to the right around Parkhouse Hill slowly gaining height, up the ridge and onto the summit. You will then follow the ridge and descend over or around the pinnacles to Dowel Dale. The descent here can be quite slippery with a certain amount of exposure. There are a number of easier routes off the hill to the north west.

At the foot of Parkhouse Hill you will begin your ascent up Chrome Hill with its majestic serrated edges. On a clear day views can be enjoyed for miles and nearby you can enjoy the sights of Hollins Hill, High Edge, Park House Hill and Hollingsclough Hamlet. You will then follow the ridge down from the summit to Tor Rock. The path then joins a gravel track above Stoop Farm and down a lane into Dowel Dale.

Easy ground will take you back to Longnor.

This is a fantastic 6 ½ mile walk starting in Castleton, passing both Treak Cliff and Blue John cavern then walking up some of the most stunning landscapes of the Peak District. Known to be one of the best ridge walks in the country, rolling and undulating giving breath taking views over the Vale of Edale, Castleton, Hope Valley and the edge of Kinder Scout.

The walk takes you to the dramatic summit of Mam Tor, also known as the ‘Shivering Mountain’, views from the top are worth every step you have climbed. From Mam Tor you’ll meet Hollins Cross before heading up to the top of Back Tor, a great sense of achievement can be felt having tagged this due to the challenging element of the exposed and steep backdrop, not to mention its gradient.

Incredible views of Kinder Scout can be enjoyed. Then onto Lose Hill Pike where an interesting compass monument can be found at the top. Superb views of some of the most idyllic parts of the Peak District.

There is also an option to extend this route to an 8 mile walk to include an amble by the river on the way back.

The gritstone edge Carl Wark rises from the heather of the Upper Burbage Valley dominating the landscape above Hathersage and Longshaw Estate. The walk starts from Longshaw Lodge, the 19th-century former shooting lodge of the Dukes of Rutland and now a country park.

Leading to a climb to the top of Burbage Rocks on the edge of Burbage Moor, the path then drops down and leads towards Houndkirk Moor. Continue to the crest of the northern part of Burbage Rocks. The edge path is followed all the way to Upper Burbage Bridge. Cross the stream here and contour below the Fiddler’s Elbow Road towards the first rocky slopes of Higger Tor.

The plateau of Higger Tor (434m/1,424ft) is punctuated by tors of grey gritstone, the most prominent of which is the Leaning Block on its southern edge. Clamber down through the boulders on a sandy path which leads across the moor to the impressive northern entrance to Carl Wark below.

The impressive stones of the 3m/10ft high monumental wall on the western entrance of this natural little plateau are majestic to say the least. According to the latest archaeological theories, this formidable defensive position may be as early as the New Stone Age. It was known as “Carle’s Work” in the 18th century, and an overhanging rock in the northern section was described as “Caer’s Chair,” the seat of justice of a chief Druid.

Walk from Carl Wark on the path down to the road junction at Toad’s Mouth – a weirdly-shaped rock which juts out over the road and looks exactly like a toad’s mouth. Finally rejoin the path back to Longshaw Lodge.

Climb to Bamford Edge on this exhilarating walk. The walk is geologically significant with lots of interesting gritstone rock formations. From the elevated position of Bamford Edge there are wonderful views over the surrounding area, such as the beautiful Ladybower Reservoir, the Ashopton Viaduct, on a clear day you can see the Derwent Dam and Howden Dam tree-line.

The walk starts from the village of Bamford and climbs on country lanes towards Bole Hill and Bamford Clough. You then head north and pick up the Bamford Edge footpath on Bamford Moor. Bamford Edge is an elevation of 1381 feet. There are amazing panoramic views across the Hope Valley, the majestic Win Hill, Lose Hill, and Mamtor and down to the spectacular Ladybower Reservoir below. On a clear day you can see Castleton. The terrain is moorland heather, bracken and rocky, you can spot some unfinished millstones along the hillside.

The route can be turned into a longer circular walk by continuing to Stanage Edge just east of Bamford Edge. Here you will find the awe-inspiring gritstone escarpment of Stanage Edge and the peak of High Neb. From here you can take in wonderful views over the Hallam Moors and the Hope Valley.

You could also descend to Ladybower Reservoir and enjoy the woodland trails along the water. The Derwent Valley Heritage Way runs past Bamford and is another option. You could follow the riverside path into Hathersage. The walk could also be started from Hathersage following the River Derwent to Bamford and then climbing up from there.

Just to the west you can enjoy a climb to Win Hill which has some of the best views in the area.

Mam Tor, or Mother Hill, is a 517 metre high imposing hill over Castleton in the High Peak. On the top was a large iron age fortress and the fortification can still be seen. Archeological findings evidence that a village was once part of the fortress.

Mam Tor sits on the edge of the gritstone Dark Peak and the limestone White Peak, its east face is a dramatic and loose expanse of crumbling rock, which gives its other name as ‘The Shivering Mountain’. Fantastic views can be seen from the top such as the dry gorge of Winnats Pass, Castleton, eastwards overlooking Hope Valley and the splendid ridge leading from the summit to Hollins Cross to Lose Hill. The north view is of the Vale of Edale and Kinder Plateau, and the west view is of Rushop Edge and Lord Seats.

Mam Tor is the main link between the eastern end of Rushup Edge and the western end of the Great Ridge. Mam Tor has a number of caverns below it, such as: Treak Cliff Cavern, Blue John Cavern, Speedwell Cavern and Peak Cavern.

100 mtrs beyond the gate cross the quarry road and through metal pedestrian gate opposite. Uphill for 30 mtrs then take wooden gate on left. Cross the quarry road again and continue on the wide track opposite. Follow the wide track uphill with broken walls either side of you. Track eventually levels out and drops down to wooden gate. Through gate and pass the 2 large metal gates on your right (entrance to quarry) and through the pedestrian metal gate just beyond.

Turn left onto farm track and follow this keeping the long narrow copse on your right. 50 mtrs after copse finishes, take stile on left. Follow the wide farm track downhill to begin with (avoid path off to your right). Track then continues uphill with wall then fence on your right. Track eventually becomes a path, and starts to drop downhill (fence still on your right). After passing through 2 wooden gates, path is bounded by stone walls left and right. Follow this path downhill, avoiding path on left by wooden gate and another off right 100 mtrs after the gate. Path finally bears right to a stile and on past a house on right back to Calver.